Insiders Called the Market’s Bottom in March, Were They Calling the Top in July?

Recently, several articles highlighted The Washington Service’s metrics for gauging insider sentiment in the marketplace. A July 22 Bloomberg article looked at the ratio of insiders buying to insiders selling (Insider Ratio), and a July 24 CNBC article looked at the ratio of companies with insider buying to companies with insider selling (Company Ratio). Both articles used partial month data for July. Now that July is over (and the reporting lag period has passed), we have a more complete picture of insider trading last month. 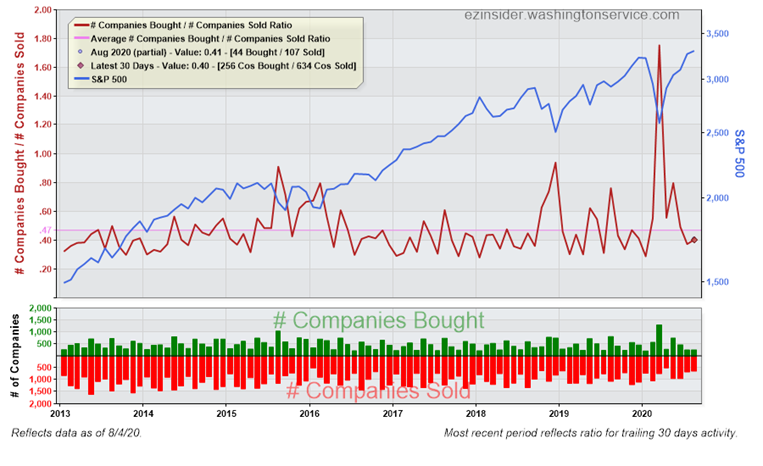 July was a month of consistently low daily Company Ratios, as shown on the graph below. There was an uptick in buying at the very end of the month, which helped push the full-month Company Ratio to its final value.

The Insider Ratio similarly dropped from the high of 2.2 it reached in March. In July, the full-month Insider Ratio fell back to 0.28. The Bloomberg article cited the partial-month Insider Ratio of approximately 0.2, and claimed that insiders are “showing signs of anxiety” with the shift back to selling. At the same time, the number of insiders selling in July actually decreased from prior months, with 1,479 sellers in July compared to 2,211 in May and 2,020 in June.

It seems unlikely based on our analysis that insiders were calling the top of the market in July, but insiders seem to be in a wait-and-see mode regarding the market’s recovery. If insiders think that the market recovery is in fact running out of steam, September will be a critical month to watch. That is the month in which insiders who correctly called the bottom of the market in March will be able to take profits off of the table, as their six-month short-swing prohibitions begin to expire. Insiders are prohibited from making short-term profits on their trades, see our FAQ for more details. If investors think that the market will continue to move upwards, they may hold off on selling. However, if they think that the market is hitting a peak and they want to cash in on savvy March purchases, September would be the earliest they could start doing so en masse.